THE PENTAGON HAS BILLION$ TO SPEND ON WAR. OUR CHAPTER HAS ONLY OUR DUES AND YOUR DONATIONS TO SPEND ON PEACE.
PLEASE CONSIDER MAKING A DONATION BY CHECK MAILED TO THE ADDRESS BELOW.
THANK YOU!

Join us for the weekly vigil at Pack Square/Former Vance Monument, Tuesdays from 4:30pm to 5:30pm.
JOIN VFP OR RENEW YOUR MEMBERSHIP
MONTHLY MEETING TIME: The Third Tuesday of each month from 6:00PM to no later than 7:00PM. Land of the Sky United Church of Christ, 15 Overbrook Place, Asheville. All are welcome; please join us. Call Gerry Werhan: (704.957.2924)

Handout for WNC Veterans for Peace Chapter 099 vigil on December 6, 2022 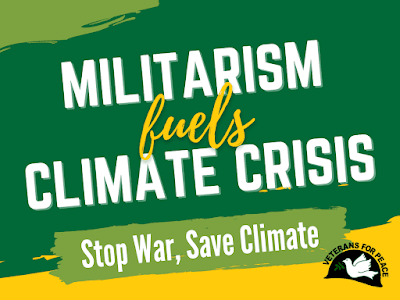 VFP Stop the War, Save the Climate! project:

This project is designed to alert the public to the connections between the ongoing climate crisis and militarism, especially the war in Ukraine, by having veterans risk arrest to stress their commitment to the message. Even though the U.S. has finally passed a climate bill in the form of the “Inflation Reduction Act of 2022,” the $369 billion energy and climate portion of the bill allocates far less than the U.S. is projected to spend on its nuclear forces alone between 2021 and 2030 and is less than 1/30th of projected military spending during the same period. This ratio of military to climate mitigation spending cannot continue if the U.S. hopes to uphold its commitments made in the Paris Agreement at COP21.

To join Veterans for Peace, or to sign up for VFP e-News, go to: https://www.veteransforpeace.org
Western North Carolina Website: www.vfp099.org

Posted by Dancewater at 12:42 PM No comments:

The first casualty of war, and militarism, is the truth. And the corporate mainstream media works diligently hand-in-glove with the US military-industrial complex to make this happen. Through its unquestioning repetition of government propaganda, its lies of omission, and its ratings-hungry war mongering, the media have become an essential part of the information war so endemic to US imperialism.

From Operation Mockingbird to CIA Director William Casey’s famous quote (“We’ll know our disinformation program is complete when everything the American public believes is false”), the control of the US public’s perceptions of its government’s role in the world has been long in the making.
Now that we are on the brink of nuclear armageddon as a result of the US/NATO pursuit of continuous war against Russia and soon, it appears, with China, it has never been more important to see through the lies fed to us from the corporate media.

To join Veterans for Peace, or to sign up for VFP e-News, go to: https://www.veteransforpeace.org
Western North Carolina Website: www.vfp099.org

Posted by Dancewater at 1:30 AM No comments: 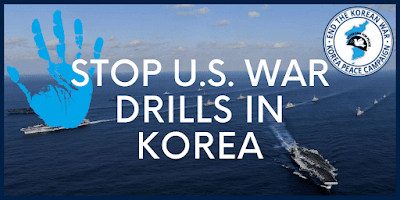 From the VFP Korea Peace Campaign: The USA in Korea

After dividing Korea into two arbitrarily at the end of WW II, the U.S. military has been more or less occupying South Korea since 1945. Uncle Sam established a U.S. military government in South Korea for three years, set up a separate regime in the South in 1948, and intervened in the Korean civil war, 1948-53, destroying the entire country with heavy, indiscriminate bombing raids.

The terrible war was stopped with a cease-fire only in 1953. Thereafter, the U.S. brought in its nuclear weapons into South Korea in 1958 in violation of the Armistice Agreement-- igniting an intense arms race with North Korea. The U.S. military troops in South Korea number about 30,000 -- which cost us billions of dollars each year that are solely needed at home. From 1950, the U.S. also imposed and maintains heavy economic sanctions on North Korea. The tragic Korean War is still continuing today without a peace treaty.

Posted by Dancewater at 1:25 PM No comments:

Veterans for Peace Chapter 099 in Holiday Parade in Asheville on November 19, 2022 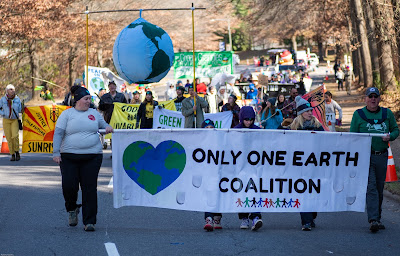 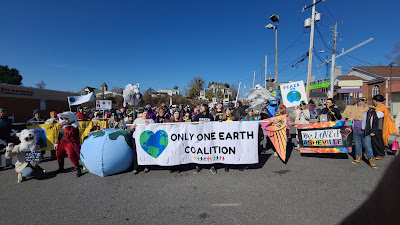 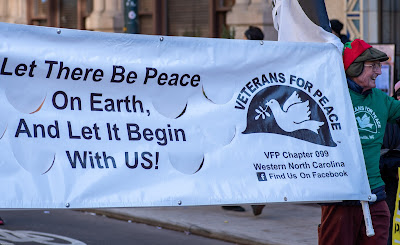 Posted by Dancewater at 5:14 PM No comments:

Letter: Reclaiming Nov. 11 as a day for peace

Veterans for Peace Western North Carolina will again this year assemble in remembrance and reclamation of the origins of Armistice Day.

Over 100 years ago, the world celebrated peace as a universal principle. The First World War had just ended, and nations mourning their dead collectively called for an end to all wars. Armistice Day was born and was designated as “a day to be dedicated to the cause of world peace and to be thereafter celebrated.”
After World War II, the U.S. Congress decided to rebrand Nov. 11 as Veterans Day. Honoring the warrior quickly morphed into honoring the military and glorifying war. Armistice Day was flipped from a day for peace into a day for displays of militarism.

Join us at the WNC Veterans Memorial near the Buncombe County Courthouse at 10 a.m. on Friday, Nov. 11, for an hour of reflections on the local influence of militarism, readings and music leading up to hearing bells ring 11 times in honoring that day 104 years ago when the world celebrated the end of “the war to end all wars.” — Gerry Werhan,  Asheville

Posted by Dancewater at 7:00 PM No comments: 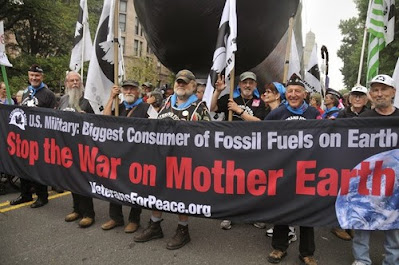 Veterans for Peace Statement on Ukraine

Veterans For Peace (VFP) unequivocally condemns Russia’s horrific invasion of
Ukraine. VFP opposes western militarism and increased US military spending, and
we are deeply concerned about even the possibility of nuclear warfare.

Veterans For Peace maintains:
● That the people of Ukraine have the right to self determination and to
lead their own struggle for national liberation.
● That all people deserve to live without military invasions, occupation or
threats of war, including the militarization of Russia’s borders by the
U.S. and NATO.
● All parties to the Russia-Ukraine War should commit to genuine
diplomacy with serious negotiations.
● War resisters from every nation deserve support and safe refuge.

Veterans For Peace has consistently advocated for an end to war and as U.S.
veterans to “restrain our government from intervening, overtly and covertly, in the
internal affairs of other nations”.

As veterans who know the enormous costs of wars, Veterans For Peace will
continue to advocate for: (a) reduction of global arms sales, (b) limiting the
expansion of US militarism globally, and (c) nuclear disarmament.

Posted by Dancewater at 6:58 PM No comments:

Armistice Day rememberance in 2022 in Asheville. 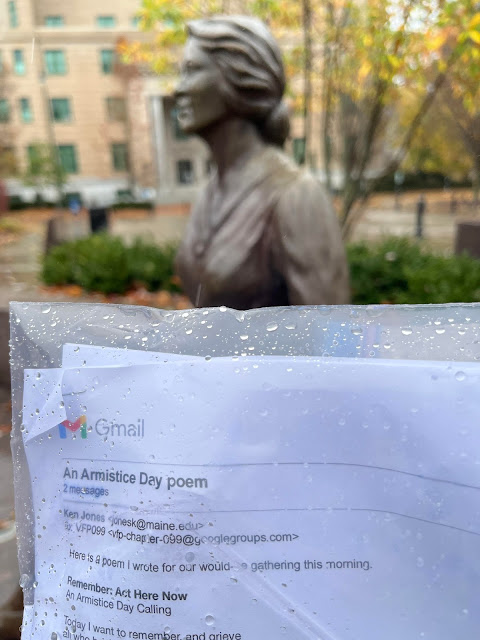 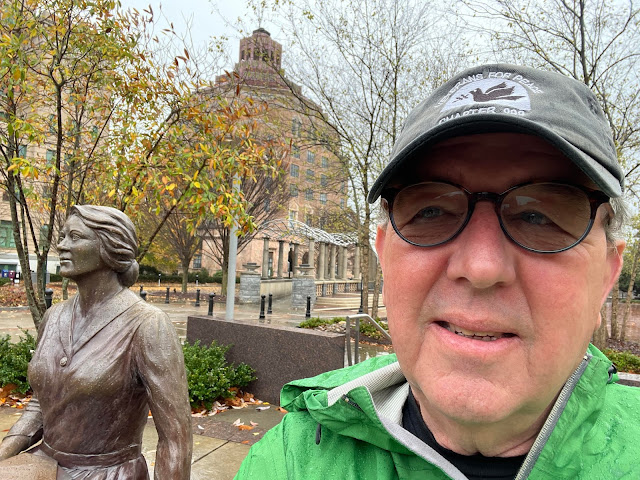 Gerry Werhan, member of VFP Chapter 099, read Ken Jone's poem this morning at the war memorial at the courthouse in downtown Asheville. It is a rainy day here for sure. This was done to mark Armistice Day. Photos by Gerry Werhan.

Posted by Dancewater at 1:16 PM No comments:

President: Bruce Carruthers
-- president@vfp099.org
Vice-President: Bruce Macdonald
-- vp@vfp099.org
Treasurer: Chris Berg
-- treasurer@vfp099.org
Secretary: Bruce Roth
-- secretary@vfp099.org
Please Note: The email addresses above are not set up to be links to an email form. You'll need to copy and paste into your email application.

Weekly Vigil Stand for Peace at Pack Square
Tuesdays 4:30-5:30pm. Join us in a year-round tradition (rain or shine, snow, cold or heat) that's been going on uninterrupted since before the US invaded Iraq.
Chapter Meeting The Third Tuesday of each month from 6:00PM to no later than 7:00PM. Held at Land of the Sky United Church of Christ, 15 Overbrook Place, Asheville 28803. Please call to confirm the meeting as scheduled, for detailed directions and to just let us know to expect you.