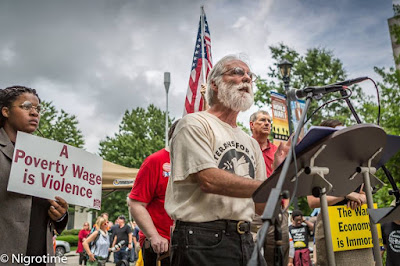 A Truthdig photographer - Michael Nigro - took this shot of Ken Jones speaking at the Poor People's Rally in Raleigh on May 29, 2018.

This is the speech given by Ken Jones at the Poor People's Campaign in Raleigh:

We all know about the presence of military recruiters and JROTC in our schools. What we should also realize is that the very curricula of schools are geared towards understanding warmaking and imperialism as a natural thing. That the norms and routines of schools all too often over-emphasize regimentation and obedience, preparing students to be compliant workers in a war economy, or to be good soldiers following orders, or – in many cases – to be prisoners. We should realize that the standardized tests that straightjacket teachers and students have a direct lineage from the eugenics movement and from the use by the military to separate and stratify its ranks.

We all also know about the glorification of war and soldiers in our movies, mainstream news, and sports events. Air shows and fireworks are designed to thrill us while acclimating us to war imagery. Video games for kids are developed in collaboration with the military. Holidays and parades are festooned with flags evoking a kind of patriotic idolatry. And now we will have Trump’s military parade in Washington DC, on what used to be called Armistice Day, now called Veterans Day. Veterans for Peace will be there to resist and to raise the banner of peace.

We should also realize how our minds and spirits have been conditioned by government propaganda and the corporate media to accept the inevitability of war and militarism. In the 1960s and 70s, there was a vibrant anti-war movement in this country. Now it is very difficult to get people mobilized to stop a nuclear confrontation in Korea, or to end our endless warmaking in Muslim majority countries such as Iraq, Afghanistan, Syria and Yemen, or to prevent the oncoming horrendous war in Iran. It is hard to get more than a small number of people organized against the brutal repression we sponsor around the world in the interest of capitalism and colonialism – in Honduras, Ukraine, Venezuela, and Palestine. Even when militarism runs amok in our own country – with our militarized police forces killing Black men and women every day, with ICE kidnapping and deporting our Latinx friends and neighbors, with the militarized attack on the indigenous resistance at Standing Rock, with the systematic dehumanization and torture in our prison industrial complex – so many of us have trouble becoming part of an active resistance.

But many of us ARE resisting, saying No More. Today, let us hold up seven Catholic Workers for their inspirational active resistance to the war machine. These are the Plowshares activists who illegally entered the King’s Bay naval submarine base station in Georgia on April 4, the 50th anniversary of the assassination of the Dr. Martin Luther King. They carried hammers and baby bottles of their own blood to symbolically “beat swords into plowshares” and to call our attention to the horror and existential threat of nuclear weapons. One of them is from right here in Raleigh – Patrick O’Neal. Not all of us can sacrifice our freedom like they have. But we can all do something to bear public witness against the madness of war and the militarism that is spreading around the world like a cancer.

Let us be clear. We live in a society that spends 53 cents of every federal discretionary dollar on the military and only 15 cents on anti-poverty programs. An average of 22 veterans are committing suicide each day. We must turn this around.

We who believe in freedom and peace cannot – and shall not - rest, until it comes. We will show up, we will disobey, we will march on. FORWARD TOGETHER…

Posted by Dancewater at 7:42 PM No comments: