Vigil and arrests at Pack Square on Veteran's Day 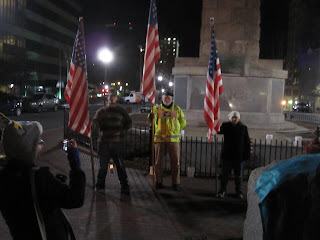 APD waited until after midnight to arrest these three veterans, so that they would not be arresting Veterans on Veterans Day.  They arrested these veterans for staying at Pack Square past the curfew.  They were charged with second degree trespass and released. 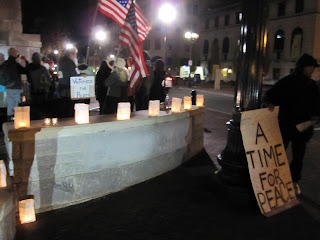 Earlier in the evening, there was a vigil and a reading of the names of US military who were killed in our wars on Iraq and Afghanistan.

Here is some information from the Asheville CitizenTimes:

Twenty-eight Occupy Asheville participants were arrested and charged with minor offenses following vigils at the Vance Monument on Nov. 2 and 5.

There were 24 arrested (or cited) on November 2, 2011 after a vigil for Scott Owen.  Four more were arrested on November 5, 2001.  In October, there were eight arrested for the same offense outside of City Hall.  Total arrested for staying in the park after curfew:  39.