THE PENTAGON HAS BILLION$ TO SPEND ON WAR. OUR CHAPTER HAS ONLY OUR DUES AND YOUR DONATIONS TO SPEND ON PEACE.
PLEASE CONSIDER MAKING A DONATION BY CHECK MAILED TO THE ADDRESS BELOW, OR BY CLICKING ON THIS PAYPAL BUTTON.
THANK YOU!

See Jim Brown's photo album.
It was the best kind of action: high visibility, low cost, and local. We enjoyed great media coverage, engaged many folks outside of “the choir,” and had fun. What’s more, none of us were arrested! In fact, the county sheriff and the chief of police were partners in the action. 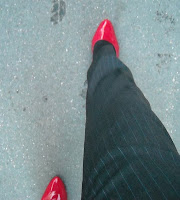 On April 30, VFP Chapter 099 (Western North Carolina) members participated in “Walk a Mile in Her Shoes” – The International Men's March to Stop Rape, Sexual Assault & Gender Violence. Team VFP099 slipped on women’s pumps, high heels, and flats and took a stroll through downtown Asheville with hundreds of other men including city council members, county commissioners, business folks, and a dozen other “teams.” 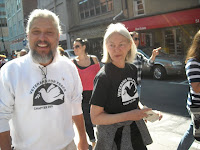 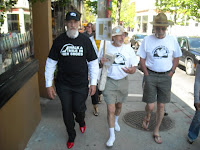 During this event to raise funds for the local crisis center for women, we were able to connect our work to theirs. In a brief recorded interview, I explained that the violence that permeates our society expresses itself as both domestic violence and foreign war and that we must work together to heal our culture. Along the march route, we engaged bystanders and gave them copies of Sandy Kelson’s military rape awareness flyer and copies of the spring War Crimes Times, referring them to the page 19 article, “17 Veterans Sue Pentagon for Indifference to MilitaryRapes.” 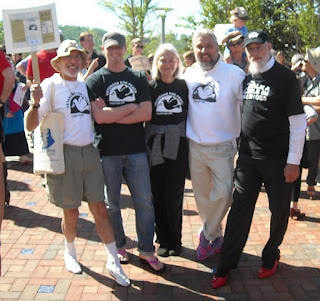 You can’t measure goodwill, but I know our chapter gained some stature in the community (in addition to the stature we gained in high heels!). I’m sure, given our long-standing weekly vigil against the wars, we’re typically perceived as narrowly focused on a single issue. But now our neighbors have seen us more as regular, community-minded folks who share their concerns as well.
We would do well to find more opportunities like this which give us a chance to connect our concerns to those of our communities.
Posted by Kim Carlyle at 7:26 AM No comments: