Joe recently spoke at Artspace Charter School in Asheville. Here is his report:

My first experience sharing the realities of American militarism with students went mostly well. The event in general, and my two minutes per question, was too short to do justice to the discussion topics, and the other veteran speaker, an Air Force veteran of Desert Storm, basically presented her motivation to join the military and her coordinating missile strikes on Iraq from a post in Saudi Arabia as a noble effort to protect America, saying nothing about the devastation to civilian life caused by the US airstrikes, or the fact that her and other US military presence in Saudi Arabia motivated Osama Bin Laden's role in 9/11. She also described her service in the Air Force, with implications about military service in general, as being like a typical 9-5 job.

Though there were some good questions asked of us by the students following our remarks, which afforded me the opportunity to deliver more talking points, there was certainly much left unsaid, which I plan to address with the coordinators of the event, in hopes that we can develop a plan to deliver the imperative background information pertaining to US-Iraq-Saudi relations that was missing from the conversation on Friday.

The questions and my responses are as follows, with the exception of the line about Hitler and Nazis, which I omitted when speaking.
-Joe

1)   Please tell us about your introduction to the concept of joining the military and what made you decide to follow through and join.
My introduction to the concept of joining the military was playing with G.I. Joe action figures and other military toys as a child, and was nurtured by TV shows and movies that glorify the military and war; video games, recruiting commercials on TV, in magazines, and billboards; military glorification in parades, at sporting and other events, in holiday celebrations, and by teachers at school; and of course by military recruiters, who tell young people and their parents anything—including lies and half truths—to get them to enlist, all of which instilled in me a perspective of military service as being an honored national tradition, that despite being responsible for terrible destruction and millions of deaths, somehow makes the world a safer, better place.
My decision to join the military came during my junior year of high school, when after years of being a less than diligent student, I felt unready for college, and saw the army as a productive way to bide my time while I figured out what to do with my life. Sadly, at seventeen years old, I was naïve of the fact that biding my time in the army would entail aiding and abetting the killing of hundreds of thousands, perhaps over a million, Iraqi civilians, including children.

2) How long did you serve and what were your primary duties?
I served for 6.5 years, from July 2003 to September 2009. My primary duty as a Unit Supply Specialist in the 10th Mountain Division was supplying soldiers with the weapons that some of them would use to kill innocent people. I also supplied Iraqi police with brand new AK-47 assault rifles, which to this day, I do not know the origins of, how they were paid for, where and how they were used, why we transported them in U.S. Army vehicles, and whether or not they contributed to making the world a safer place; I suspect not. While stationed in Japan with the 83rd Ordnance Battalion, I was involved in the storage and maintenance of vast stocks of munitions, which if used in the event of a military conflict in the pacific theater, would undoubtedly result in the loss of innocent life.

3) Compare and contrast your preconceived ideas with your reality of military life.

My preconceived idea of military life was one of comradeship, honor, and respect. The reality I experienced was a class society, wherein junior enlisted soldiers are the lower class, deprived of certain freedoms and respect afforded to the upper class of senior ranking soldiers, and who, often at the will or complicity of the senior class, suffer from racism, sexism, dehumanization, sexual assault, unfair punishment, public humiliation, indoctrination and orders that can lead to physical, mental, emotional, and moral injury, and death. I learned that institutional racism and dehumanization are also tools used my military leaders to make it easier for their soldiers to overcome the moral instinct against killing. Adolf Hitler and the Nazis used them to make it easier for Germans and their allies to kill Jews, gypsies, and others, and Americans continue using them, because many soldiers care more about their careers, i.e. money and power, than respecting and protecting human life.

I have learned that these attacks result in countless civilian injuries and deaths, which promotes hatred of America, and endangers us rather than protects us.

Finally, I have learned that if we are going to change our government’s propensity for perpetual war, and we can, we must take nonviolent action toward a more compassionate and humane society, for as president Eisenhower said, “Only an alert and knowledgeable citizenry can compel the proper meshing of the huge industrial and military machinery of defense with our peaceful methods and goals so that security and liberty may prosper together.”
Posted by Dancewater at 11:10 AM No comments: 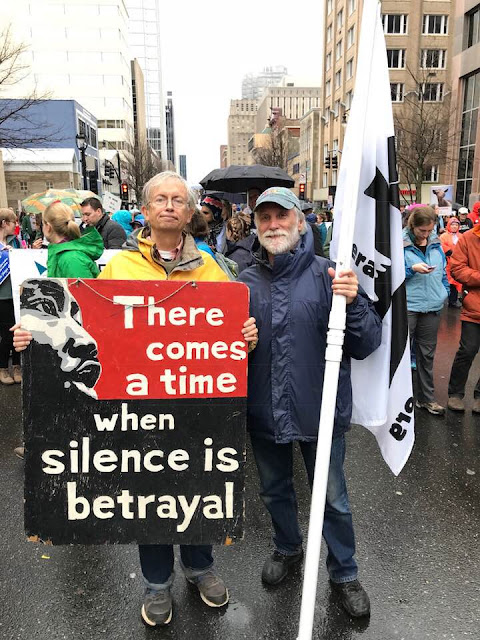 Chris Berg (L) and Ken Jones at the Moral March in Raleigh on February 10, 2018. Carrying the Vets for Peace Chapter 099 flag on a wet day. Photo taken by random person in the crowd.
Posted by Dancewater at 5:11 PM No comments: 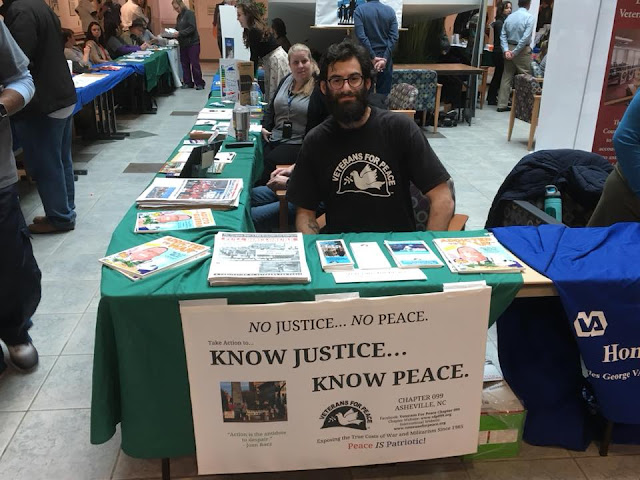 Photo by Gerry Werham. This is Joseph John at the Veterans Administration Community Resource Fair on February 1, 2018.
Posted by Dancewater at 7:09 PM No comments: