THE PENTAGON HAS BILLION$ TO SPEND ON WAR. OUR CHAPTER HAS ONLY OUR DUES AND YOUR DONATIONS TO SPEND ON PEACE.
PLEASE CONSIDER MAKING A DONATION BY CHECK MAILED TO THE ADDRESS BELOW, OR BY CLICKING ON THIS PAYPAL BUTTON.
THANK YOU! 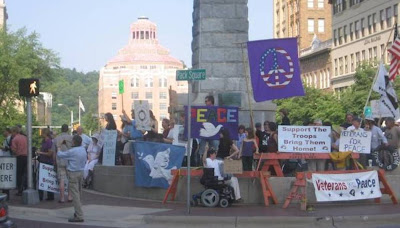 Stand with VFP and other peacemongers at Pack Square each Tuesday from 4:30 to 5:30pm.
Posted by Kim Carlyle at 9:33 AM No comments:

As we observe the holiday on November 11 and any related events, remember

(below) that reminds us: "the substitution of the word "Armistice" to

Whereas bells worldwide were rung on November 11, 1918 to celebrate and

recognize the ending of WWI, "The war to end all wars" and

Whereas to commemorate that peaceful pledge, bells were rung November 11

Whereas, legislation making November 11 a holiday passed in 1938, " Shall

celebrated and known as "Armistice Day." and

Whereas the 83rd Congress, at the urging of the veterans service

organizations, amended the Act of 1938 by striking out the word

"Armistice" and inserting in its place the word "Veterans." With the

11th became a day to honor American veterans of all wars, and

Whereas the substitution of the word "Armistice" to "Veterans" changes the

focus from peace to war by celebrating and honoring warriors and war, and

peaceful future and away from war, and

Whereas, too often rhetoric and patriotic symbols are used instead of

genuine compensation for the extraordinary sacrifices and services of

veterans, the public is distracted from the awful price paid by those

other than military members, and

Therefore Be It Resolved that Veterans For Peace, Inc. urges its

ringing on Armistice Day, November 11 and other solemn occasions.

to remember the original intent of Veterans Day.

The original Armistice Day ended World War I on November 11, 1918, but not

before nearly 30 million soldiers had been killed or wounded, and over

and passed a resolution calling for "...exercises designed to perpetuate

peace through good will and mutual understanding...inviting the people of

the United States to observe the day in schools and churches...with

appropriate ceremonies of friendly relations with all other peoples."

Congress later resolved November 11 was to be "...a day dedicated to the

cause of world peace."

Of the many veterans' organizations in the , one exists specifically

to carry out the original purpose of Armistice Day, now celebrated as

Veterans' Day. In word as well as action, Veterans For Peace, a national

organization with 120 chapters, is dedicated to the cause of peace.

"Veterans For Peace has over 120 chapters around the country, many of whom

will be commemorating veterans day by marching in traditional parades,

conducting solemn ceremonies and vigils to give an alternative view about

war and the meaning of the day," McPhearson went on to say.

'abolish war as an instrument of national policy.' We want this

generation of veterans to be the last," said VFP president Elliott Adams.

The former Army paratrooper and veteran added, "We not only speak

out for peace, our organization works towards it every single day. We will

, Gulf and current wars as well as other conflicts cold or

hot. It has participated in every major demonstration against the war in

. Our collective experience tells us wars are easy to start and hard

to stop and that those hurt are often the innocent. VFP is represented at

the UN as an official Non-Governmental Organization (NGO).


What? - An e-mail/discussion group that enables us to exchange information and ideas. Group members can communicate with the entire group by using a single e-mail address.

Who can join? - anyone who wants to keep informed of our activities and efforts to promote peace.

How do I join? - Send a blank e-mail message to vfp099-subscribe@yahoogroups.com The Yahoo Group Service will reply with a confirmation message. Simply reply to the confirmation by e-mail and follow instructions to complete your enrollment.

How do I send a message to the group? - Once your enrollment is complete, you may send and receive group messages. To send a message, address it to vfp099@yahoogroups.com.

What if I want to leave the group? - Each message comes with an easy unsubscribe link. You may also remove yourself at any time by sending a blank message to VFP099-unsubscribe@yahoogroups.com.

Can I catch up on past messages? - To maintain Members' privacy no archive is visible on the web. Email delivery of all new messages does not contain members addresses. A message post does contain the sender's address.
Posted by Kim Carlyle at 10:27 AM No comments: